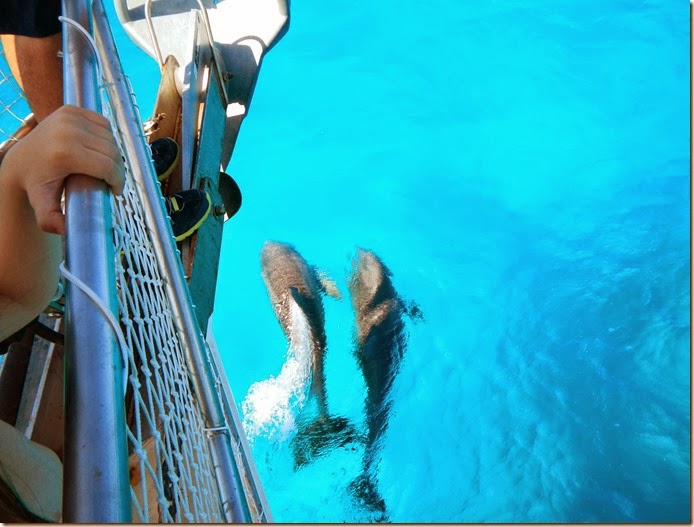 Even though it was a rather slow sail down wind back to Nassau it was great. Half way there we got a couple of visitors playing off our bow, it made our day. Pri was rather disappointed that mermaids didn’t accompany them but excited all the same. 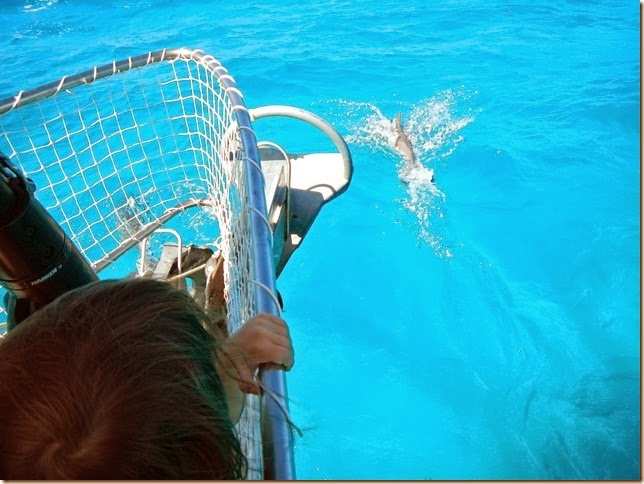 It was a great day to test our sailing skills, we had a friendly Catamaran Viento talk us into putting our spinnaker out for the first time, Carl was determined to beat them back to Nassau. 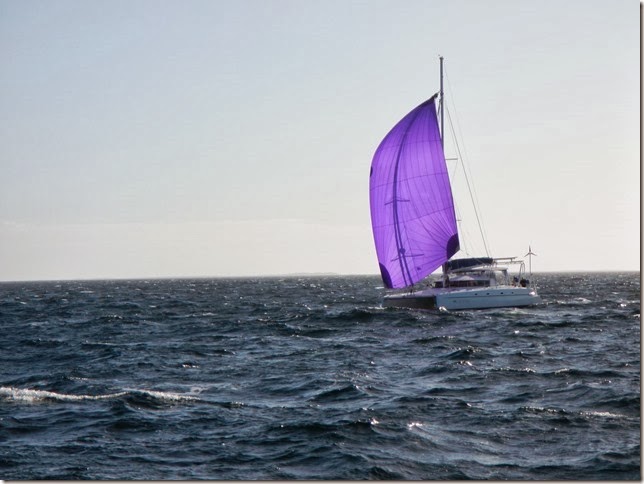 It was a bit of a bear getting the sail out of under the forward cabin bed but once on deck it went smooth. I kept an eye on the girls while Carl got everything organized. We had taken the old spinnaker off of the Skye 51. 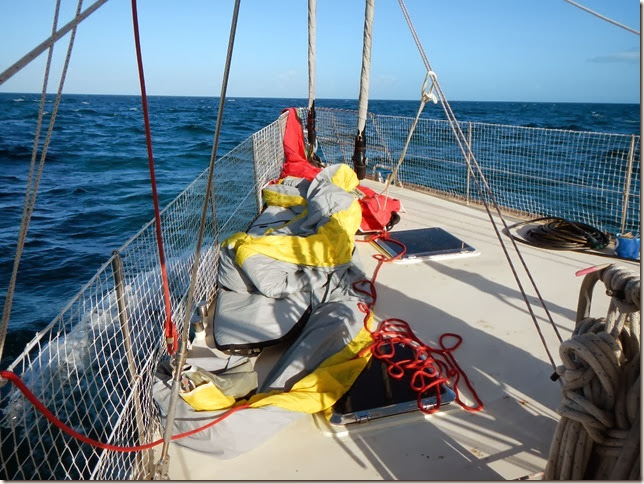 We weren’t too sure on the where to secure the points but that’s just trial and error. And up she went. 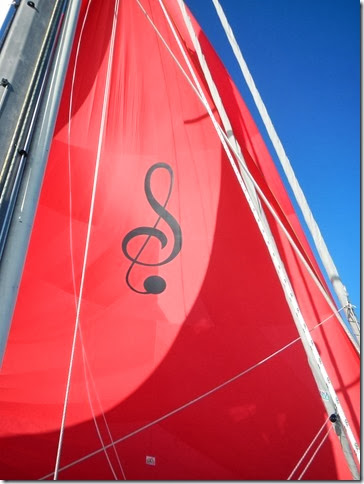 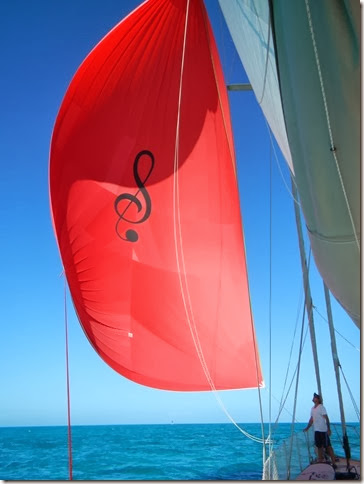 We didn’t gain a lot of speed and it made the boat rock a lot because we had to reef down the main in order not to block the wind. I think it’s really too small for our boat it was for a 51’ ketch not a 65’ steel beast. It was fun to have it up and flying even though it didn’t help close the gap between us and Viento.

We kicked back and chilled for a bit while admiring our first attempt at putting up a spinnaker on Salty. Nice. Next we heard a humm then a loud hummm and the next thing we knew the US Coast Guard helicopter was circling us. The first thing that popped into our minds was holy crap the girls set off an epirb, or the pushed the SOS on the spot or VHF. We rushed around checking while the helicopter kept circling. Then we thought they should be radioing us. What they were doing was getting close enough to see our name on the back of the boat. How close can a chopper get to your boat? Pretty bloody close, we waved to the man hanging out the side.

They finally made radio contact and wanted to know if we had seen any signs of the two divers missing off of Highbourne Cay yesterday. The current would drag them in the same path as we were taking to Nassau. We told them we’d keep our eyes peeled. 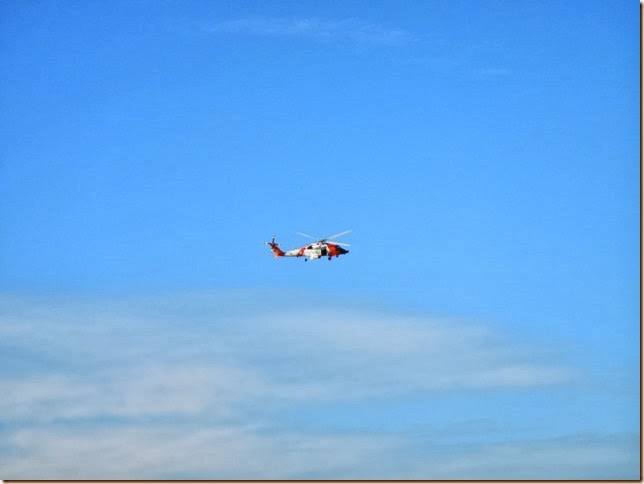 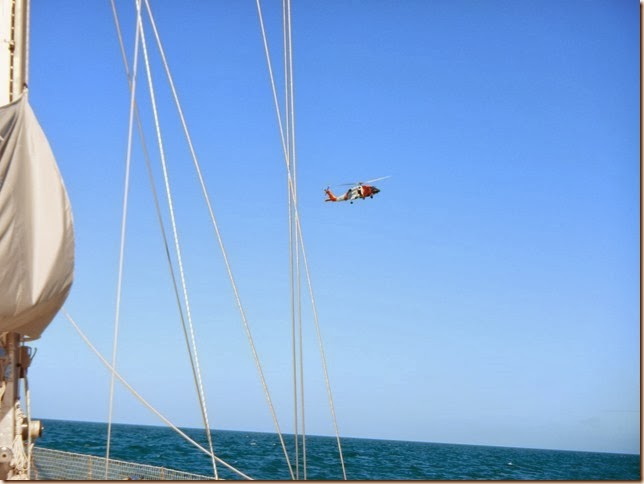 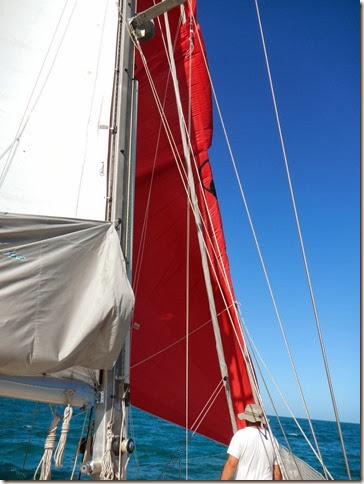 And this is what happens when a helicopter gets too close to your spinnaker, thanks guys! The US Coast Guard pretty much hovered in our vicinity the rest of the way to Nassau. Closer to Nassau we heard on the radio that one diver had actually made the swim to Nassau and was safe washed up on the beach. As far as I know they are still looking for the second. It was a 7 hour sail back but we didn’t mind, we were glad that we were all safe and sound aboard Salty and not drifting alone in the water. Here’s the Coast Guard report: Missing Diver off Nassau